This shop has been compensated by Collective Bias, Inc. and its advertiser. All opinions are mine alone. #UltimatePitStop #CollectiveBias

We’ve had a month full of Cars at our house! Between events, crafts and the release of Disney•Pixar’s Cars 3 in theaters, we can’t get enough of our favorite Disney race family. My oldest daughter is eight years old and has grown up loving the Cars movies. She is a big Lightning McQueen fan but after seeing Disney•Pixar’s Cars 3 last week, she is now calling Cruz Ramirez her favorite. I don’t blame her, she’s a great role model and exactly the strong confident Disney character I want my girls looking up to. This week we had some fun at home with new Cars 3 toys and a Lightning McQueen Race Ready Challenge Activity. The printable activity turned into a fun family game played with our new Just Play Cars 3 Mack’s Mobile Tool Center and Just Play Cars 3 Transforming McQueen Tool Kit. With an Amazon Prime account, you can have these fun Cars toys in your home soon for endless summer fun! Hover over the photo to click through to Amazon.com for purchase. 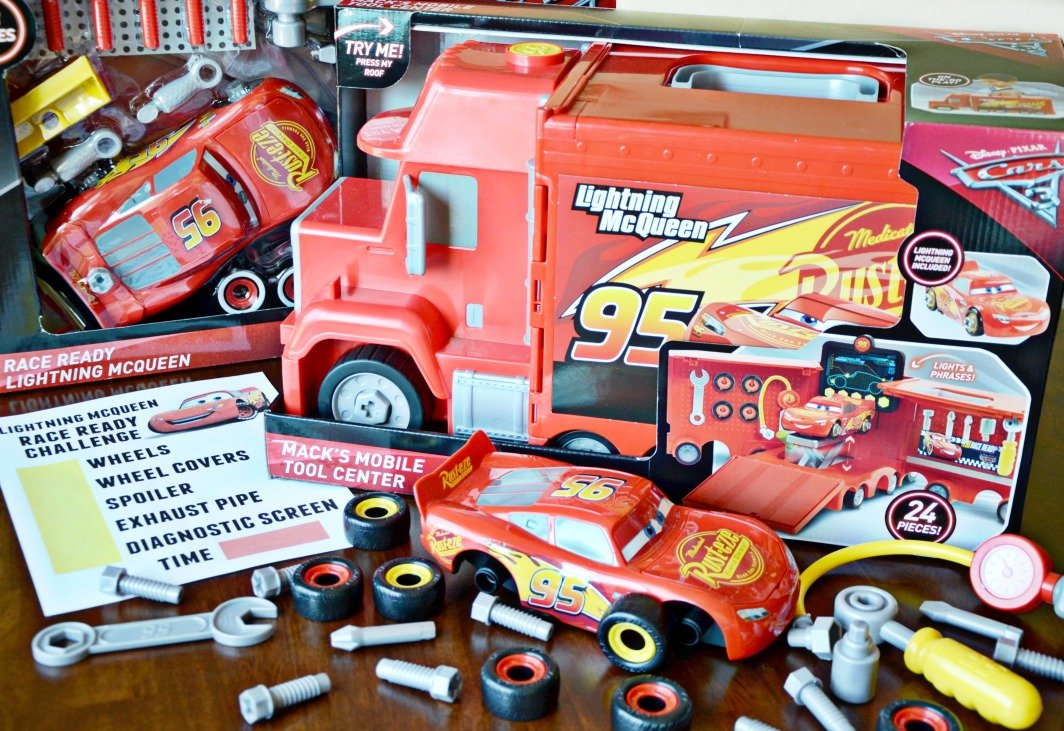 Wearing her favorite Cruz Ramirez shirt and Cars headband, my daughter was very excited when the Amazon package full of Cars fun arrived on our doorstep. Before we opened the Cars 3 merchandise boxes, I knew my daughters would love the toys! Just Play Mack’s Mobile Tool Center is huge with a very real Mack that opens and a full set of tools to get Lightning McQueen race ready! Lightning McQueen is also included in the mobile tool center play set. Pressing the top of Mack makes fun race noises and the big diagnostic screen makes sure Lightning is race ready. With 24 pieces and so many different hands on activities including a real working lift, Mack’s Mobile Tool Center is a great purchase for the ultimate Cars fan! The Just Play Cars 3 Transforming McQueen Tool Kit provides more options to customize Lightning McQueen. This play kit also provides you with spoilers, wheel covers, and exhaust pipes. All tools and car pieces also fit the Lightning McQueen in the Mack’s Mobile Tool Center Play Set. Having both sets is ideal for families with multiple children like ours. The Cars toys are so much fun to play with and offer endless creativity with so many different race ready options. After playing with the toys for awhile we created a family challenge because our family is competitive and loves family game nights. The Lightning McQueen Race Ready Challenge Activity is a game our family will definitely enjoy playing together all summer long but is great because it can also be enjoyed with just one player too. Disassemble Lighting McQueen and place all race ready tools on flat surface for challenge. To complete, you must put Lightning McQueen back together to get him race ready with wheels, wheel covers, a spoiler, exhaust pipe, and run a diagnostic check. Start timer and begin!

My daughter is very competitive and was in the starting position before the timer began ticking. She had her eyes on the timer and was ready when I said, “go!”. She worked quickly and had Lightning McQueen race ready in about four minutes on her first try. After several more tries she had the challenge completed in less than three minutes. Although she repeated the challenge more than 10 times to beat her own fastest time, the Lightning McQueen race ready challenge activity won’t stop until she feels confident she can beat every family member’s time too. We created a great family game and another way to play with our new favorite Cars toys. How quickly can your little speedster get Lightning McQueen race ready?

Learn more about Disney•Pixar’s Cars 3 by connecting with Disney and Amazon on their social channels.